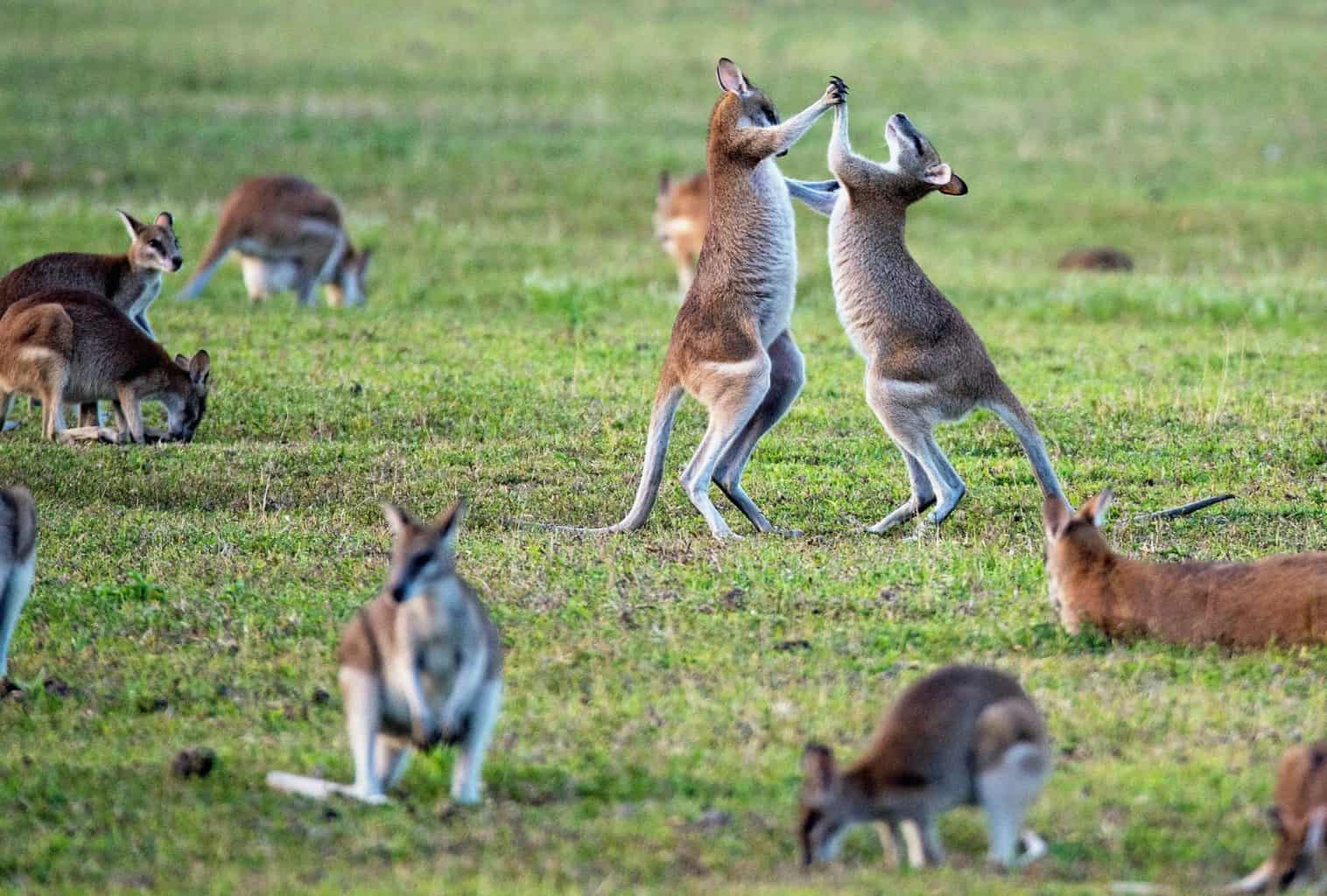 Dingoes and Digital Woes: A Nomad’s Trip Down Under

As the days of sun and rice fields in Bali dwindled down, the next leg of my journey quickly approached. I had been teaching English online for the last 4 months, and budgeting for one paycheck each month. I knew Australia was going to be a tougher destination to afford than the previous Southeast Asian countries, especially with the abundance of hot spots in such a beautiful, vast landscape.

In the weeks prior, I had applied to participate in a work exchange located in the dense northern forests of rural Queensland. The hope had been to gain some experience while supplementing the expenses with two jobs. My luck had finally seemed to turn around when I got accepted to live and work in a family-owned zoo for a portion of my time in the outback. Animals have always been a passion of mine, and the opportunity to live and work with them seemed like a dream.

Arriving at the airport with my boarding pass and backpack in tow, the stars had seemed to align. That is, until I walked towards customs. The man in the booth asked for the usual, passport, boarding pass, and visa. VISA?! I couldn’t believe that I had made such a huge error. My plane was set to board in 1 hour and I didn’t have the funds to buy food or accommodation, even for one more night, in Bali. Panicking, I pleaded with the man behind the booth as a flood of anxiety-induced tears started to brim under my eyes.

Visas, it turns out, are required to enter into Australia. As a USA citizen, I had never traveled anywhere that required me to have one (i.e. I was ignorantly privileged). Just as I was about to accept defeat, the kindly Balinese attendants started discussing to themselves in a language foreign to me. Turning to my embarrassed expression, they stated they may be able to expedite the process, but it would cost an extra fee (still not sure if this was legal but it worked?). I scrounged the last of my money from an ATM and offered the bills to them gratefully. 30 minutes later, I had a visa in my hand and was waiting for my group to be called at my gate. Safe to say, I knew I was off to a rocky start.

Landing in Australia, the heaviness lifted, but only momentarily. My hosts had expressed their concerns about my digital work requiring fast and reliable Internet in such a remote area of the country. But, given the abundance of options for portable Wi-Fi in this modern era, I hatched a (seemingly?) foolproof plan. I hurriedly asked anyone I could find at the Cairns airport where I might be able to buy a portable Wi-Fi device. A man at a Boost counter became my savior as he pulled out a MiFi box, the tiny device inside promising to be my life raft for the next few weeks of online classes.

I hopped on the bus that my hosts had recommended (after trying to enter on the wrong side the first time, and being deemed the “silly Yankee” for the rest of the drive), and felt a weight lift off my shoulders.

I got off at the designated stop with my bags in tow, and waited to see my host’s van pull up. Half of the duo I was to be working for pulled up and greeted me. Tossing my bags in, we discussed daily duties and swapped travel stories.

As we passed miles and miles of empty landscape, my host explained that they took one trip into town (which was about 40 minutes out) per week, and that I could give her a list of items I needed to be picked up for their “city runs”. As you can imagine, the anxiousness began to set in.  Most digital nomads would agree that freedom reigns pretty high on their list of priorities, and mine had just been put on a leash. As the entrance came into view, I was told that I would have roommates, two French men about my age whom spoke a little bit of English.

I received the rundown of the tasks and schedule I would need to adhere to, and was shown my room. There, I got my first taste of how big Australian spiders could really get. Luckily, the journey was so tiring that I was able to ignore the 20 arachnids looming over my head against the ceiling, and drifted off within seconds of my head hitting the pillow.

The next day, I opened my laptop and began the daunting task of connecting it to the mi-fi device I had bought for work. To my dismay, I learned that the device had just been full of empty promises. I wasn’t able to connect to any Wi-Fi to do my job. And I was supposed to be at this work exchange for two weeks. And I hadn’t been able to communicate to my family that I had landed safely in a new country for the last 24 hours. And I had classes scheduled for that evening, after my full day of zoo work. *Cue vicious panic attack*

So I evaluated. I had no way to work for money, no savings to get myself anywhere for the remainder of my trip, and no form of bus or car to get me to civilization. Yikes.

At this point, any sane, rational person would have probably asked their family for money and left, or at least tried to have a conversation with the hosts about the situation I was in. But after hearing their stories and seeing the excitement in their eyes to have me a part of their team, I couldn’t bear the thought of letting them down. So, I avoided the inevitable realization that I couldn’t stay and that my job would probably let me go for not being able to teach classes. Therefore, my world journey would be coming to an abrupt halt. Bye-bye, Great Barrier Reef.

Three days in, I had finally found the courage to express my desperate situation to my bosses, and packed my bags to leave. It also helped that I had been scraping bird shit all day and painting shed walls. The nice gash I got on my hand from a feisty black macaw helped too.  If that wasn’t enough to boot me out the door, the proposed task of “chopping up old butchers meat for the crocodiles” did my candy ass in. I would have to say goodbye to the adorable dingoes and kangaroos. I awaited my taxi (which would end up costing me over 80 AUD – I had to call several companies before finding one that would venture out to get me) to drive me into Port Douglas.

Buckling under defeat, I borrowed money from my family and booked a night in the closest available hostel room. After calculating, I knew that my last paycheck would arrive in three days. Three days and then I would need to head towards USA territory. At this point, my online company already sent me a contract termination email for which I knew I had a month left of teaching before my time was up. My grandparents had happened to be at their home on Maui. So switching flights, I grabbed up whatever refund I could and waited until the day was to come for my paycheck to deposit.

The last night in Australia was upon me, and I had classes to teach at 1 am (the time difference between my students in China led to some pretty strange schedules). From 1 am to 5 am I taught English, checking my bank app at intervals. That morning, I was to be checking out of this room, and I had no flight booked and nowhere to go. The hostel offered a free shuttle to the airport at 9 am, which was my one shot. So, I set my alarm for a quick 2-hour rest period, and abruptly woke up to purchase my one-way ticket to Hawaii.

After informing my family of my flight’s predetermined arrival time on USA soil, the journey began. Lifting off from Cairns, then from Melbourne, and finally landing in Kahului. The familiar “get up and rush to grab your shit” bell dinged throughout the plane, and I reached for my phone. Turning off airplane mode and easing back into my seat, the bells of notifications flooded in from my family. Apparently, the arrival time, and day, on my Australian plane ticket did not account for the 1½-day time difference that occurred as I flew across the Pacific Ocean. So, my family did of course the most rational thing, and called the embassy.

Thoroughly embarrassed, the passengers around me exchanged glances as my face turned bright red and sweat began brimming while my phone lit up like the Rockefeller Christmas tree. Several dozen phone calls later, and I was finally able to breathe in the fresh Hawaiian air. Now, it was time to begin saving for the next leg of the journey, to the mainland.