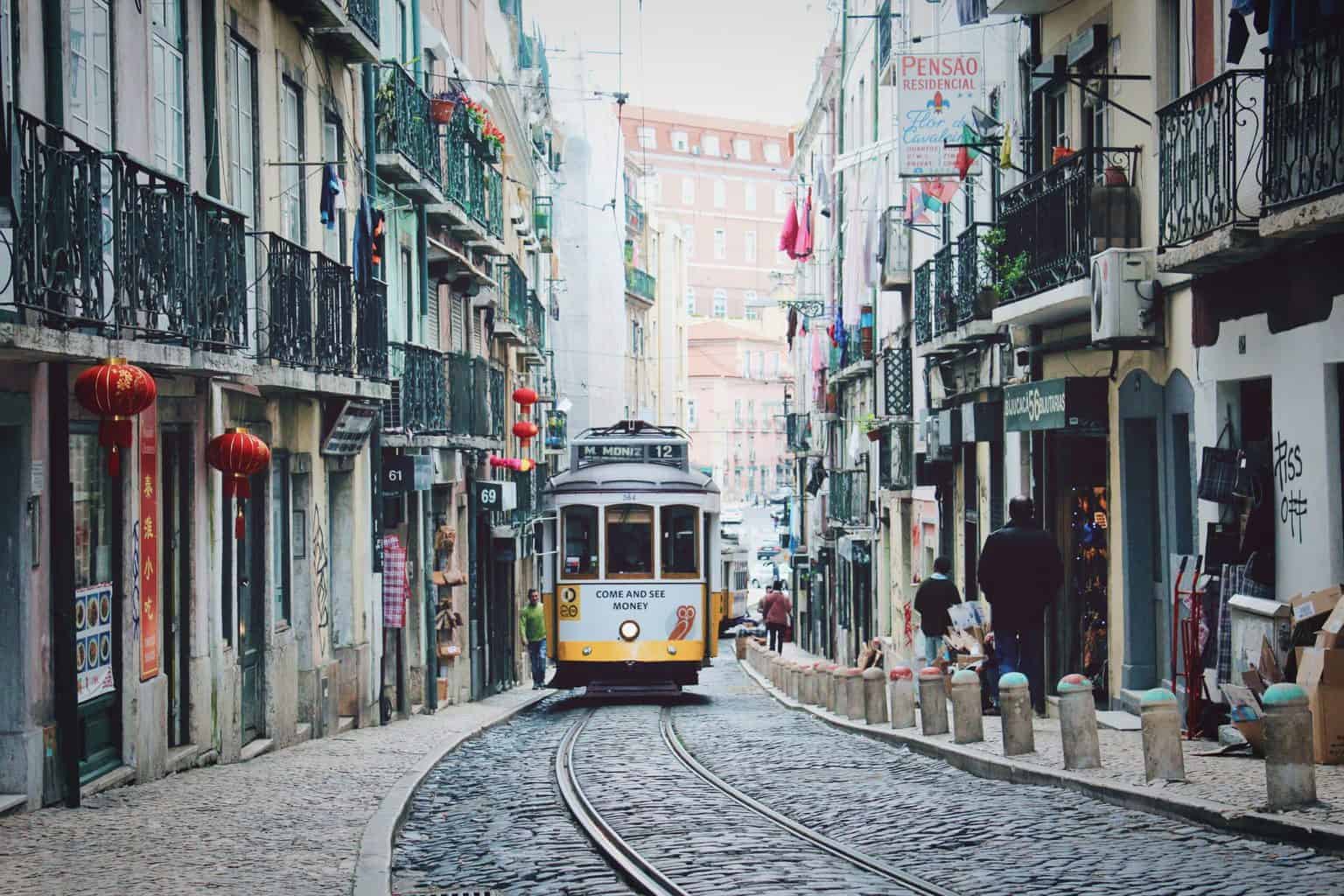 The Ultimate Guide to Portugal for Digital Nomads

Capping off the very end of Western Europe is a country that’s charmed many a digital nomad in the last decade: Portugal. From the sun-baked Algarve and its glorious beaches in the south all the way to the lush hills of the Douro Valley in the north, it’s a serious looker. The cities buzz with life, no matter if you head for hedonistic Porto or go for the miradors and castles of old Lisbon. The food is a tempting medley of salt cod and fresh veggies. The weather is all ocean breezes and plenty of sun. What’s not to like?

Since around the turn of the millennium, Portugal has also positioned itself as one of Europe’s burgeoning digital hubs. Huge investments in internet infrastructure have brought connection speeds into the 21st century, while an overhaul of neighborhoods like Ribeira (in Porto) and the Bairro Alto (in Lisbon) mean there are now more stylish Airbnbs and flats than you can shake an Azulejos tile at.

And if all that sounds like only good news, it’s because Portugal for digital nomads really is something to write home about…

Portugal for digital nomads at a glance

The cost of living in Portugal

One of the trump cards for digital nomads in Portugal is surely the reduced cost of living, even when compared to its near neighbors of Spain and France. Granted, this isn’t the cheapest destination on the globe, but for Western Europe it’s a veritable wallet-boomer.

Naturally, outgoings will depend considerably on where you choose to live. Lisbon and the Algarve reign as the most expensive options of the lot. Meanwhile, the wilder Silver Coast and the green regions north of Porto tend to be easier on the bank account.

A few examples of costs in Portugal for digital nomads are:

The weather in Portugal

The weather has to be one of the strongest draws of Portugal.

You’ll enjoy a full four seasons, only the warmth of summer tends to linger long into October (especially in the south), while the cold snaps of winter can often be felt into early May. Generally, though, the conditions stay mild for much of the year, with spikes in rainfall in December and January, and scorching summertime heat between July and March.

Spring and autumn are usually short lived but beautiful. April and May see wildflowers coming to the meadowlands of the stunning Peneda-Gerês park. September is the time that the holidaying crowds depart the Algarve and leave the beaches secluded but still bathed in sun.

You’ll also find a big discrepancy between the weather in southern Portugal and the weather in northern Portugal. It’s quite common for folk to be wrapped up in winter coats on the plazas of Porto but soaking up the rays on the golden beaches of Faro. Be sure to check the average monthly temperatures in your chosen destination and pack the bag accordingly.

Finding places to stay in Portugal

Thanks to Portugal’s recent economic upturn, there’s a lot to be said for the condition of its major cities. We last visited Porto in 2018, and saw construction on virtually every corner in the historic quarter of Ribeira. The same was true of Lisbon in 2017. The upshot is that there are stacks of brand-spanking new Airbnbs up for grabs in the bigger towns. Meanwhile, the tried-and-tested holiday areas of the Algarve and the Costa da Caparica have the usual mix of hotels and aparthotels just a stone’s throw from the beach.

Finding a pad in inland Portugal and the Extremadura can be harder. Up there, where stone villages cling to the sierras, the search is probably best done in person. It’s only short-term stays and hotels that can be booked in advance in such rural areas.

Some example tools to use to find that perfect digital nomad home in Portugal are:

Airbnb has been given a new lease of life in Portugal’s big cities. As the country positions itself as one of the startup and DN hubs of Europe, there are huge domestic and foreign investments going into building just the sort of sleek, modern flats that us location independents are always hunting for.

A web portal that’s built by DNs for DNs, DigitalNomads.pt might look and feel like Airbnb, but there’s a huge variety of listings on this one that you won’t find elsewhere. They come in all shapes and sizes, from beach-view flats to inner-city apartments in the capital. The best part is that the whole site is aimed specifically at location-independent workers, which means the barebones of what you need are usually taken care of – fast internet, attractive neighborhoods, comfy beds.

Visas and documentation in Portugal

Portugal is a member of the EU and the Schengen Agreement. That means travelers coming in from another EU country won’t have to apply for a visa at all. They have the right to work, settle, live, buy a car, get a dog – you name it!

If you’re coming in from the US, Canada, or elsewhere, it’s possible to enter Portugal on a Schengen visa. The reality is that most digital nomads in Portugal who don’t come from the EU are using those to get in and out. However, it’s strictly for tourism purposes, so you’ll want to look into Portugal’s specific working visa options to be on the safe side.

The top destinations for digital nomads in Portugal

We think Portugal’s stunning second city just pips the capital to the post here. It’s certainly a tight-run race, but there’s something seriously wonderful about those cobbled lanes, medieval castles, and great Baroque palaces spilling down the hills to the reflective Douro River.

The draws don’t end there, either. Some sumptuous Airbnb rentals hide in the colorful Ribeira area (a UNESCO World Heritage Site). The wine – the red especially – is surely some of the best in the world. And you’ve got really good access to gorgeous beaches, which string both to the south and the north. There’s also excellent surfing in Porto. DNs who take the board in tow can go south to Esmoriz or up to Azurara to find challenging but empty waves.

For coworking in Porto

With four locations – one on the Douro Riverside, one in the downtown, one in Santa Catarina and the last one on the seaside – this creative coworking spot runs regular lectures, workshops and talks. Porto i/o is a great place to meet and mingle with other digital nomads in Portugal’s northern city.

Lisbon is a seven-hill wonder of a city. With high lookout points that gaze across the wide Tagus Estuary, Moorish castles that go back hundreds of years, and buzzing party areas like the Bairro Alto, it’s got loads to keep all sorts of digital nomads going. Unlike plenty of other European capitals, Lisbon shouldn’t break the bank. What’s more, the cost of living is hardly high, and you can still grab a beer at a local bar for no more than a euro.

It’s worth doing a little research into Lisbon’s various neighborhoods before you come here and settle. It’s not a vast metropolis a la London, but each corner of the town has a unique vibe, whether that’s the historic maze of alleys in Alfama or the spice-scented hills of Martim Moniz, the oriental and Indian quarter.

For coworking in Lisbon

On one of the main avenues leading into the heart of central Lisbon, this well-located co-work hub has plenty of natural light in its spacious offices. There are communal kitchen areas and posh bathrooms at Liberdade229 along with a lovely family vibe.

Peniche is a surf town at heart. In fact, the Peniche surf is considered some of the very best in all of Europe. Just mosey down to the curling beach of Supertubos in the mid-summer and you’ll find pros aplenty trying their hand at the roaring barrels. There are other breaks too, ranging from gnarly reefs to easy-going beginner waves. Digital nomad surfers could do far worse than one of the coast-view condos that sit between Baleal and Ferrel, or a cozy cottage in the heart of Peniche itself.

For coworking in Peniche

Pretty much the only co-working option in Peniche, Largo is located in a quiet area of the old district. Simple, friendly and affordable, it’s everything you need to set up the office after a day on the waves.

Sagres has the enviable position of being smack bang on the south-western tip of the country. That means it’s connected to two coastlines, with the golden beaches of the Algarve to the east and the wave-spattered Atlantic to the north. It’s also a lovely place to look at, with sheer cliffs leading to surfer favorite Tonel Beach, and whitewashed bungalows stringing along the shoreline. We’d recommend heading Sagres way in spring or autumn. The swells are still good then, the weather is warm, but the crowds of the summertime decrease dramatically.

For coworking in Sagres

The now-global chain of DN camps come surf schools that is Cowork surf was born in Sagres.You’ll have 40-megabyte internet just a stone’s throw from some of the nicest beaches and best waves in Portugal. Not bad, eh?

If it’s history and culture you’re after as a digital nomad in Portugal, Coimbra could be a-calling. Straddling the Mondego River up in the inland hills, it carries the weight of being the onetime capital of the country. Throw in a gorgeous Reconquest-era cathedral, an old town with cobbled lanes and café-rimmed piazzas, and a stunning Baroque university library and you begin to get the full picture. Coimbra might not be by the beaches, but it’s also way less busy than most coastal hotspots on this list, making it a fine choice for the summer months.

For coworking in Coimbra

Uber-stylish and elegant, this work hub has a track record of helping creative design brands get a foothold.

Feel free to add your tips, ideas, destinations or tricks in the comments below. We’re always looking for more info to add to this ultimate guide to Portugal for digital nomads!