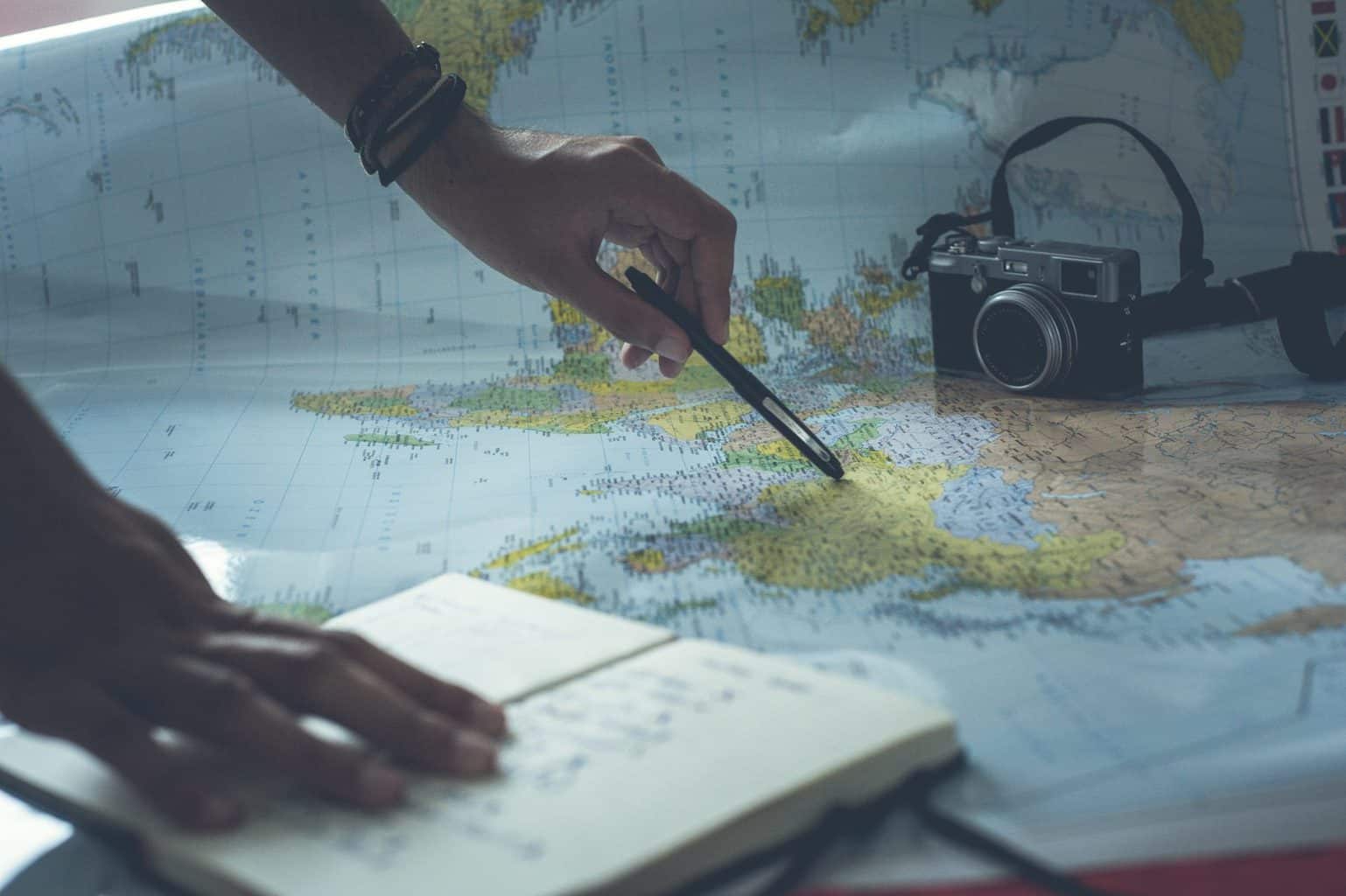 Meet our digital nomad guides. Our guides are for anyone looking for the most essential information to any country or city. Over time we will keep adding new guides, so make sure to bookmark this page to come back at a later date.

Our guides cover the best cities for digital nomads, countries, and everything useful ranging from visa requirements, cost of living to coworking spaces and accommodation.

If there’s a specific city or country we haven’t covered and you’d really like to see it featured, don’t hesitate to contact us and we’ll have a writer work on it!

Paradise! This is one way to describe Croatia. Croatia is the place to fulfill all your Mediterranean fantasies. This country has world-class beaches, delicious food, high-quality wine, and plenty of beautiful sites. It truly is an exquisite location; however, how does it compare if you are trying to work?

With its wild forests, sweeping all the way from the Russian border to the Baltic Sea, and its cobbled cities dating back millennia, you might think that Estonia was the Europe of old; untouched, undiscovered, untrodden. Not a chance. Proudly rebranded e-Estonia in the noughties, it’s one of the world’s most cutting-edge digital nations. It gave us Skype and harbors more start-ups than Silicon Valley. There’s uber-quick internet and the groundbreaking e-residency scheme that’s a boon for many a digital nomad.

Bordered by six nations rich in environmental and cultural heritage, France is one of Europe’s largest countries. It is known as the most popular tourist destination in the world. The European territory is a natural beauty with a fantastic climate and enjoyable outdoor attractions, such as art museums and galleries to satisfy you.

Germany is one of the powerhouses of Europe and is a desirable destination for freelancers, ex-pats, and digital nomads alike. While in the beautiful country, opportunities are not difficult to come by, whether you’re looking for an entrepreneurial adventure or just to explore the history-filled streets of its beautiful cities.

There are a lot of reasons why the Romans coveted Greece. It’s a hub of rich culture, it’s got breathtaking sceneries, and most of all, it is the seat of knowledge. Living in Greece is like living in paradise and even vacationing in it is like having a taste of Olympus on Earth.

Hungary may be one of the less popular tourist sites in Europe, but that doesn’t mean it should be ignored. Full of history, art, and unique culture, Hungary brings a particular aspect to Europe. It truly is a hidden gem. With Roman-inspired architecture and special cuisine, Hungary offers a different travel experience that has visitors falling in love.

It seems that digital nomads have caught on that Ireland is actually one of the best countries or places to be in and live their desired lifestyles. The emerald isles have actually welcomed a lot of these backpackers and adventurers alike in the past few years.

Ah, Italia. It might be shaped like a boot, but it sure don’t smell, or taste, or look like one! Rolling from the cathedral spires of the Dolomites in the north (like Colorado in the Alps) to the temple-topped coastlines of amazing Sicily in the south, this is one of the great jewels of Europe.

Old yet modern, friendly yet rude, the Netherlands and its people are industrious, intelligent, and beautiful. Among the Dutch, there is a culture of ‘just be normal’, which means not standing out too much and doing as the other dutch do. That sounds like a horror story to my American sensibilities but this way of thinking empowers the country to invent, innovate, and reflect on its work, its history, and its own culture.

Bursting with culture, rich with history, and astoundingly affordable, Poland could just be the perfect nomad destination you’ve never considered. Ranging from the craggy Tatra Mountains of the south to the windswept sands of the Baltic Sea in the north, it’s one huge cut-out of Europe. Between its boundaries are buzzing cities, rustic farmlands, and wonderful lake districts. There’s just so much to explore.

Capping off the very end of Western Europe is a country that’s charmed many a digital nomad in the last decade: Portugal. From the sun-baked Algarve and its glorious beaches in the south all the way to the lush hills of the Douro Valley in the north, it’s a serious looker. The cities buzz with life, no matter if you head for hedonistic Porto or go for the miradors and castles of old Lisbon. The food is a tempting medley of salt cod and fresh veggies. The weather is all ocean breezes and plenty of sun. What’s not to like?

Spain is a dynamic, beautiful, and interesting country. There’s plenty of variety and uniqueness. Of course, Barcelona and Madrid are energetic and hip, while the northern portion is a more Southern-living style.
When you’re there, the natives love to host strangers and have visitors. They’re always drinking wine, laughing while eating a delicious meal, and just enjoying life in a way that other cultures haven’t realized. People are never rushed here, it seems. Therefore, it makes it the perfect destination for a relaxing vacation.

Cambodia has long been designated a tourists’ paradise in southeast Asia. While for a long time in the past, it has served the purpose of a resting place for exhausted backpackers, recent developments and city up-gradation have undoubtedly changed that scene completely.

Laying across the Equator, spread over a whopping 17,000 islands, dashed by primeval rainforest, and dominated by smoking volcanos, Indonesia is somewhere you’re not likely to forget in a hurry. A real economic powerhouse of Southeast Asia, it’s the most populous Muslim nation on the planet and a doozy of a destination for anyone searching for adventure, peanut-infused foods that zing with spice, legendary surf, and encounters with rare wildlife...

Situated in the center of the Indochinese Peninsula, Laos is the only landlocked country in Southeast Asia. The Annamite Range surrounds it in the east and the Mekong River. If you want to go back in time and walk-in times past, Laos offers a unique experience. There is no shortage of inspiration and calm courtesy of the rich panoramic views and beautiful natural surroundings from Laos’s inviting mountainous landscapes, rivers, waterfalls, and forests.

Malaysia is a diverse country filled with picturesque landscapes and intriguing people. You are never far from lush flora and fauna nor a short drive to a bustling city. The towns throughout the country are made up of traditional buildings nestled in amongst buildings of modern architecture. The juxtaposition of their structures is mirrored in their people. The citizens of Malaysia come from a wide range of ethnicities. No matter which city you visit, you meet other digital nomads and ex-pats from your home country.

Clear blue skies, tropical weather, and kind people are some of the best features of the Philippines. In this country, you will learn the real meaning of life and appreciate everything around you.

Washed by the waves of the Indian Ocean, crumpled by mountains that look like twisted giant’s fingers, and fringed by coconut-strewn beaches, Sri Lanka is an enticing destination no matter who you are. Days of soaking up the sun, munching on far too much curry (just wait for those spice-packed lentil dals at breakfast!), hiking tea-covered slopes, or surfing glassy reefs are all part of the deal. And that’s not even mentioning the immersive mix of Buddhist culture and rich kingly history...

Sizzling noodles topped with peanut crumb. Turquoise seas washing into cotton-white sands. Coconut groves and tuk-tuks. Hardy kickboxers and serene Buddhist temples. It can only be Thailand: The Land of Smiles!

Incense swirls around the pagodas. Water buffalo grunt in the rice paddies. Mist blankets the mountains. The South China Sea laps against Halong’s mighty islands. It can only be Vietnam, the S-bending backbone of Southeast Asia.

Surrounded by water but geographers classify it as a continent. Welcome to Australia. It is one of the largest countries and desirable places in the world that comes with diverse wildlife, exotic beaches, and sophisticated metropolitan cities. The opportunities for people who want to work in Australia as a digital nomad are ten-fold, for they have a robust economy with some of the world’s highest wages.

Well pour me a tequila and call me Juan – it’s only Mexico! From the dusty canyons of Chihuahua (not the dog!) to the lush jungles of the Yucatan, this corner of North America (yes, it is North America!) is a jewel of a destination.

Did you know? Costa Rica falls under the category of happiest countries in the world. Right from its colorful currencies to its world-renowned beaches, there is no doubt why most digital nomads choose to land in this country. Known for its massive biodiversity and world-class coffee beans, Costa Rica is truly a breathtaking place!

Guatemala’s rich culture and heritage are top of the reasons why they get a flock of visitors all year round. The country is just filled with Mayan mythology as well as breathtaking sceneries and landscapes and who can pass up on a visit to the UNESCO-protected Antigua with all its Renaissance and Baroque architecture if they get a chance.

Argentina is the most visited country in South America and the second most visited Latin American country after Mexico. This country has a vast amount of land filled with tourist attractions, a wide variety of climates, natural wonders, culture, and traditions. Known for its gorgeous landscapes and cultural heritage sites, it’s the reason why Argentina gets such a significant number of travelers.

One country that is rapidly developing in South America is Colombia. While it may not be as safe as other parts of the world, the country is quickly industrializing, and lots of money is being put towards infrastructure and travel. This means the quality of life in Colombia is continually getting better, especially in certain cities. It’s becoming a more attractive destination for digital nomads for this reason, too.